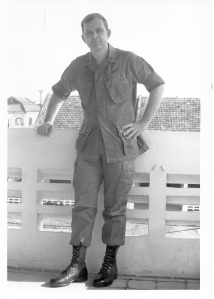 I remember so well when the first NVA 130mm round landed about 200 yards from two of us in a plywood building where we were pulling TOC duty that Thursday after lunch.  We were part of Advisory Team 155 working with the 3rd ARVN.  This was not at the major HQ TOC, but a small Team 155 TOC that listened in on the radios just to keep us up to date and as a safety backup.

I remember hearing on the radio about the same time a frantic call from an American Marine Major at an observation post on the DMZ.  I will forever hear these words, “Enemy Tanks, trucks, troops in the open coming through the DMZ … my God … as far as I can see.”  Those were his last words … and all went silent.  I hope he made it out okay.

We notified Colonel Metcalf and jumped in the little covered fox hole next to the hut.  We must have received 100 rounds in the next thirty minutes and then it was all quiet.  I knew we were in deep trouble.  When we got out of the fox hole, the jeep and hut were junk from shrapnel hits.  Even the radios were torn up.  We ran back to the main compound.  My second war went down hill from there … way down. Colonel Metcalf and I were the first of our Team to get to the Quang Tri’s Three Star Compound in August or Sept 1971.  We had a jeep and drove all over the prior Marine Base looking for the best location for a Team Site.  We finally ended back up at the helipad/ Field Hospital as it had working generators and all the comforts of home.  Damn that Marine base was big … had to be for a Division of Marines.  It was like a Ghost Town.

By March 1972, we were well-organized and even had a small Officers and NCO club, PX, post office, and great mess hall.  We slept on cots/beds and had clean and pressed uniforms everyday.  The only real discomfort was guard duty.  Majors and below had to pull guard duty … the real guard duty of walking/driving the perimeter.  I understood, since there were so few of us in Team 155, and we couldn’t ask guests to pull guard duty.  I was miffed as a Major who had come through the ranks from Private … but I got over it.  What the hell … who picks their own wars?

We saw many of you guys coming and going through our compound.  I was the Team G1 Advisor/Admin Officer.  I had switched from Infantry to the Adjutant Generals Corps in 1968 so as to not going back to Vietnam two or three more times.  Ha … They got me back anyway.

A far cry from my first tour in 1966-67 in Vinh Long in the Delta where I was an Infantry Advisor to a RF/PR Battalion.  They even sent me to language school, so I could talk to my counterpart.  We lived and fought in the rice paddies and swamps for most of the year.  Not a good year.  I didn’t know I had another bad year coming.

On Saturday night, April 1st, around 2200 hours, Sgt Harrison and I were in a large bunker on the south end of the compound.  There were so few of us that we almost had our own individual bunkers.  The field phone to the bunker rings and I answered.  It’s the Team 155 switch board.  “Sir, you have a call coming in from the Red Cross, I will switch you over.”  For the next two or three minutes, I find out that my wife had just had our first son the day before on March 31st.

I find out when I get home, a month later on emergency R&R, that she was still in the hospital a day or so after Easter Sunday and saw us on TV evening news … all of us running and getting airlifted out of the compound.  My Mom was with her … they actually saw me jumping from fox hole to fox hole.  What a damn crazy world.  It’s even more bizarre today with cell phones and embedded reporters.

We had a visiting ABC reporter and camera man visiting us when it all started. They were happy to leave too.

We left the Three Star compound in several Huey Choppers.  It was an unusual group of men … about seven in my chopper.  Even though I was the ranking man it didn’t mean anything at all, just a group of cooks, mail man, clerk typist, motor pool man, and a Quartermaster Sergeant.  About five minutes later, the young Warrant Office pilot says, “Sir, I’m going have to let you out some where. I have an emergency mission to get some American Advisors out of camp near the DMZ.  They are getting over run right now.”

We land, God only knows where to this day.  I had no map or even idea of where we were.  The chopper flies away about the same time that a 130 mm round lands about 100 yards a way.  We had attracted an enemy forward observer with the Huey … or so I thought.  I looked around at my rag tag army and thought, “Here we going again, and we are all paper pushers.”

The small hill we landed on was hard clay, and we didn’t have any entrenching tools.  We just hugged the ruts in the road.  After five minutes and way too many close rounds, I saw a ridge and yelled at the men to follow me.  We jumped over the ridge to safety.  Short lived however.  Below us about twenty meters are three beautiful American 105 Howitzers with pallets of rounds stacked near the guns.  Nobody was in sight.  The South Vietnamese artillery men had left town and didn’t even spike the guns.

Now I knew what the forward observer was shooting at – not my rag tag army, but the guns.  We had landed at the wrong place at the wrong time.  I called the mail room soldier over to me.  He was carrying our only radio, a PRC 25 with short antenna.

We were starting to receive small arms fire now and fired back.  We each had a M16 and five clips each.  I was the only one with a grenade.  Outside our canteen, we had no food or more water.  No map, we didn’t know where we where … and I wanted to see my new son.

I grabbed the radio handset and turned the radio on.  I had no code book or frequencies.  I just started talking on the frequency it was set on and hoped for the best.  I yelled, “Mayday, Mayday” for five minutes.   Finally this quiet Southern voice says, “Hello, Mayday.  How can I help you?” Two American re-supply Hueys were flying close by.  They were empty and going back to Quang Tri City for more supplies.  Thank God, I had a smoke grenade also.

As the first Huey is coming in, he yells, “Hey you guys are under artillery and small arms fire.”  I tell him that yes we noticed.  He is worried about landing near the guns and stacked ammo while under fire.  But being the brave Americans that pilots are, they come in.  I get four men on the first chopper and the others and I catch the second one.  I looked back at the three 105’s … I wish I could have destroyed them.  I knew they would capture them and use them against us.  They did.

We land inside the Quang Tri Citadel and meet up with the other Team 155 members, and stay there to the last day when we got evacuated by the Jolly Greens.  (Ed. note – see Evacuation from Quang Tri Citadel)

Back down to Da Nang, and little action after that until I rotate out in August.

So far that was my last war …  Thanks for the memories.