A Bit About Me

I was drafted by a very low lottery number in 1970, but I beat the system, and instead of Uncle paying me for two years of service, I squeezed 20 out of him.  Prior to reporting for my draft physical, I thought that I would enlist instead – I had read enough to know that someone my size would be a perfect fit for the Army’s “tunnel rats,” and I for one, did not want to do that.

Since I could not pass the enlistment physical because of my size (too light), I was drafted and immediately “re-enlisted” to join the Army Security Agency.  The ASA recruiter at the Army and Air Force Examining Station assured me that there were no ASA units in Vietnam.  Less than 8 months after entering Active Duty, I was in Vietnam – in a “Radio Research” unit, since of course, “there were no ASA units” there.  It wasn’t until the late ’80’s or early ’90’s that we were finally authorized to wear our “ASA Patch” on the right shoulder of our uniforms.

I spent my first seven or so months in country at Phu Bai, working in the 8th Radio Research Field Station, also known as “Tri Bac Station.”  I was sent to the 407th RRD as an “urgently needed replacement” shortly after a perceived breach of protocol on my part while giving an intelligence overview briefing to a General Officer.  I was still basically “the new guy” at the detachment when the Easter Offensive began.

I retired from the Army in late 1990 as a young Master Sergeant and have stayed busy and otherwise productively employed since then. My intent in sharing “The Last Seven Days” with you is simply to expose as many people as possible to the experiences of a few days of my tour of duty in Vietnam, and using that exposure, remind you that thousands of young men sacrificed their lives in that war, and yes, it was war, in heroic service to our Country.

As I type this, I’m reminded of the families and individuals who lost a son, brother, father, mother, uncle, aunt, cousin, nephew, niece or friend.  They too are heroes. Unfortunately, during the days of that war, all together too many thousands of Vietnam Veterans were not viewed, recognized, treated or are even remembered as heroes.  In fact, more often than not, they were openly vilified as pariahs, drug addicts and villains. It’s my prayer and hope that after reading this account, you will thank a Vietnam Veteran and/or his or her family for their sacrifices and service.  It may be the first time they’ve heard it, and I’m sure they will appreciate it.

If you are interested, I’ve made the guestbook from the original “The Last Seven Days” web site available here.  You will notice that some of the comments appear to have been cut off in editing – that was a limitation of the comments block on the form that automatically truncated comments to a preset character count –  I never could figure out how to change that.

Thank a Veteran’s family for their sacrifices in supporting their Soldier, Sailor, Airman or Marine!

Thank you for visiting, and I look forward to reading your comments. If you’d like to contact me personally, outside of the blog, you may email me at gdwhit2001@yahoo.com.  Otherwise please post your comments below, or on the “Guestbook Home” comments area. Click here to return to the main article. 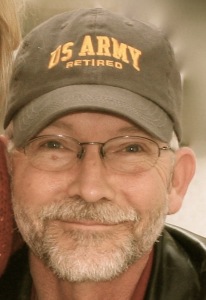 P.S.  I’ve recently published a book of the blog I maintained with my family during my last overseas deployment as a Department of Defense Senior Military Intelligence Advisor to the Iraqi Ministry of Defense.  The book is titled “Papa’s Log,” you can find out more about it and if interested, order it from Amazon.

Another Update … while going through my Mom & Dad’s boxes of memories, I ran across a couple of pictures from ‘back in the day.’ I suspect it would be hard to recognize me from these pictures. The one on the left was taken at a gunnery range near Phu Bai, probably in late 1971, and the other was my reenlistment at Fort Bragg in the fall of 1972.

34 Responses to A Bit About Me